Yard Museum of the USSR 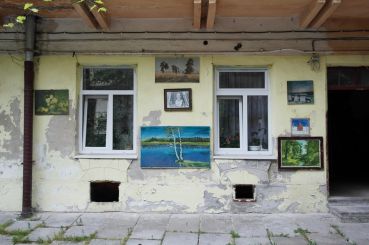 Strolling through the historic Lviv, in particular on the streets of Prince Leo, we recommend to roll to the house at number 3 to take a look at an unusual exhibition. This is an interesting exposition of things, born in the era of the Soviet Union and collected thanks to the initiative of residents of neighboring houses.

Dozens of curious visitors and tourists tried to learn from the residents of the outstanding court, when and where did the first objects that formed the basis of modern exhibition. But neither the local old-timers or participants gallery, and did not remember the first things that make ordinary Lviv courtyard turned into a dynamic sprawling museum.

As often happens during repairs, revisions of cabinets, drawers and pantries, people find and stake the courtyard old paintings, furniture, vases, busts of members of the political elite (which is now associated the Soviet era). The exposition was formed randomly and get extremely entertaining.

Now it is a grand collection, consisting of portraits of popular Soviet-era poets, artists, general secretaries of the Soviet Union, utensils, rag dolls and figurines, as well as many other things, it was fashionable to have a home 50 years ago.

For tourists, located in the courtyard of the museum, on the street Prince Leo, 3, is to look into the neighboring yard. A notable guests of Lviv will be another unique collection - the lost toys . Outdoor exhibition began with a couple accidentally forgotten toy animals, which quickly got the same neighbors from nearby houses. Now this is an interesting collection of different things from the world of childhood: from dolls to machines and operating bicycle.

What is the best accessible to the Yard Museum of the USSR from: