The Yard of Lost Toys 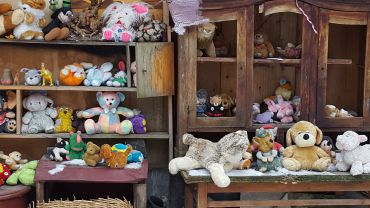 Yard lost toys in Lviv can be found in the area Podzemche at Prince Street Leo 3. This is the usual urban courtyard surrounded by five-story apartment buildings.

The area is quite old, the people in it - are familiar with each other people. It is in this relaxed, confidential atmosphere could organize the most unusual exhibition in the world - an exhibition of lost toys. It is important to note that not all residents of Lviv familiar with this exposure, and many do not even know it exists.

History of the exhibition

His appearance owes a simple exhibition of local residents - Vasily Petrovich. One stumbled on two forgotten toy near his home, he placed them under the roof in the courtyard. Over time, as the others began to arrive, and residents of the area.

Thus, for several years it has a gallery of different plush bunnies, bears, PUPS, winding machines, bicycles, skipping ropes and other things. The peculiarity of this collection, according to old-timers, is that it is very changeable: there are those who bring toys, and those who come here to pick your favorite thing.

In recent years, the range of exposure became significantly expanded - new interesting items not related to the children`s games. Among them there is a pair of boots, forgotten tools, books, old musical instruments and hundreds of things that tell a lot of interesting and unusual about the multifaceted Lviv.

In addition, the city`s history, as well as possible, can tell the famous Flea book market , where the lovers of original publications. Also in town are many other historical attractions, squares, monuments, theaters and galleries.

What is the best accessible to the The Yard of Lost Toys from: