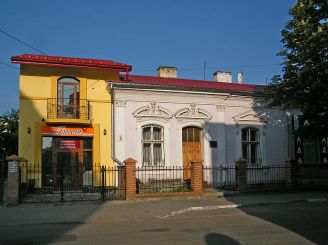 The museum, which presents a unique collection of folk embroidery and clothing, is located in a family house where the couple lived previously Baćina.

Olga Bachinskaya - known ethnographer, became the first woman of Galicia, who took over as head of economic institutions. The Directorate "Maslosoyuza" it was part of 15 years and was known as a public figure.

One of the main interests of Olga was Bachinskogo Ukrainian embroidery. His collection of ethnographer even represented at the exhibition in Austria. It includes examples of typical individual regions of Galicia, and has implications for the study of Ukrainian folk embroidery and ornament of the early 20th century.

Also in the museum, which is under the reserved two rooms, you can see the family photographs, archival records and documents, to see personal belongings Baćina. However, it represented only part of the collection - some of the exhibits are in Lviv Museum of Ukrainian Art .

Reach Stryja you can train or bus, which run regularly from the city. Bachinskogo Museum is located in the central part of the city. It operates on weekdays from 14:00 to 17:00.

What is the best accessible to the Memorial Museum Olga Bachinskogo from: