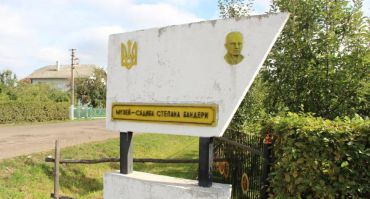 Now the village of Wola Zaderevatskaya goes wide rumor that has spread far beyond the Lviv region and even Ukraine. And all thanks to the notorious Stepan Bandera, which is associated with the personality of the national liberation movement of the 40-50-ies of the 20th century.

It should be said that the family home became a museum Bander since the first days of independence of Ukraine. First look after him girlfriend sister politician - Anna Ivan. Now he has become a real museum, where every year you can see something new. Exhibition itself is divided and stored in six separate areas. The first room is devoted to the family pedigree Bander. The second is a chapel, where his father, Stepan, a priest, baptized children. Every single room is connected to the stages of the formation of the young Stepan as a person. Here you can experience the atmosphere in which grew the future leader of the OUN, as well as get acquainted with his life and revolutionary activities and materials about the death of Bandera.

The most valuable are the four original artifacts that belonged to the family: wardrobe, table, sideboard and bambetl (wooden bench).

Most often, the museum visited by tourists from Morshyn, because there is easily accessible by bus. Doors open manor from Tuesday to Sunday for anyone wanting to.

What is the best accessible to the Manor Museum of Stepan Bandera from: