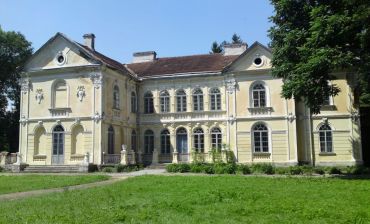 In the village of Cherry Lviv region is a palace-estate Aleksander Fredro, the famous Polish comedy, comedy and the founder of the Polish language. He is the author of numerous plays, prose works, it is called "the Polish Moliere."

Aleksander Fredro built a palace in the style of English Baroque for his wife Sofia in 1835. And in honor of his daughter, Sophia, too, my father planted ornamental trees in the park of the estate. The adult daughter Fredro would later become known as the mother of Metropolitan Andrey Sheptytsky ...

Terrain Park Manor Fredro, an area now is 12 acres, was created about 40 years, everything is left to chance. And it is very pleasant to wander among the shady trees, admire Exotics, look at the calm surface of the lake.

In 2010, the palace was opened memorial room Aleksander Fredro.

The village is located between the Cherry Lvov and Sambor , near the highway Kiev - Uzhgorod. Turn to the cherry - before reaching the town Rudki.

What is the best accessible to the Manor Aleksander Fredro from: