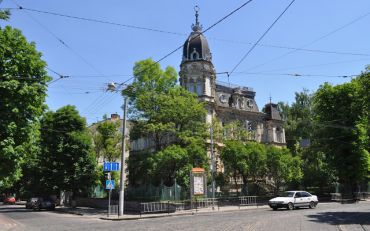 The house represents the beauty and luxury of the wealthy that period. Construction of these architectural objects at that time was a kind of competition among the rich, who also did so profitable investment of their capital.

The history of the house, Mrs. Franz

Family had Franz career with plaster factory, located at the end of the neighborhood, which at that time was called Frantsivka. Later pits formed on the territory of Sandy Lake. Also built a sports park, which in 1920 became Gdansk. In the 60`s and 70`s of the 20th century it was built up of apartment buildings, hotels and hostels.

Franz Josef house is made of brick, with a mansard roof, plastered and decorated with rich sculptural decoration. Mesh facade of the palace engaged Edmund Plishevskyy.

The plan is close to the quadrangle, and bulk composition is asymmetric. Arched windows decorated with rectangular frame.

The feature of the composition was dome-shaped tower. The building with wings surrounded by a small garden.

Interior design has retained its original stucco decoration of walls and ceilings.

Getting to Villa Franz

Franz Family Palace located on the street Konovalets. Here is the route of the 2nd tram near the stop street intersection is Miller. On the next street Antonovich many walks through the nearest taxi stop Melnyk.

What is the best accessible to the Villa Mrs. Franz from: