Monument to the Unknown Sailor in Odessa 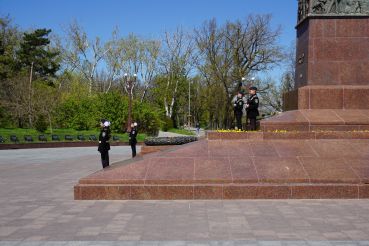 Odessa - Hero City, 73 days resisting invaders. City fought bravely with the 300,000th German army, tearing into the country. Fierce battles were fought on land and at sea. Thanks to the courage of the sailors, the Black Sea Fleet was able successfully to keep the defense of his native coast. The city has witnessed a bloody war and heroism of the defenders to the last stand behind their Odessa. On those days, filled with grief and courage, now in Central Park to them. Shevchenko monument to the Unknown Sailor recalls.

21-meter obelisk, towering over the sea cliff, visible from afar. For it is the Walk of Fame , where the stone slabs engraved with the names of heroes - defenders of the city.

But many of those whose names are lost in history. In memory of the dead sailors, who will remain anonymous, in 1960 created the obelisk of red granite. Under it burns the eternal flame, framed in bronze wreath. And at the foot of a "guard" are bronze gun and peakless cap.

The place where a monument to the Unknown Sailor, attracts visitors to the park, because, among other things, it offers a wonderful view of the boundless sea.

What is the best accessible to the Monument to the Unknown Sailor in Odessa from: