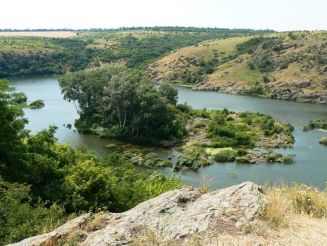 Tract Gard is a granite canyon of the river Southern Bug, and is the heart of the regional landscape park "Granite-steppe lands of Buh" . Rocky Gorge Tracts - a unique natural monument, a place inhabited by rare animals and plants. A picturesque island Gardovy gardovogo gorge and rapids are not only the most beautiful but also the most difficult route of the park.

Tract Gard is also a valuable historical monument. Here in 1740 was built Zaporozhye Cossacks New Sech and formed the Bug-Gardovskaya Palanka (strengthening) of the Zaporozhian baseman military administartivny center of which was present in Bogdanovka. Island Gard served as a ferry across the Southern Bug. Remains Cossack Cossack fortress and wooden fortress on the island survived until the mid-20th century. In the 1970s, after the construction of the South Ukraine nuclear power plant in landashftnogo Park, tract underwent significant destruction, were vzrovany grantinye rocks destroyed Cossack church. However, there are still remnants of the island, all the flora and fauna are also amazingly beautiful and rich, and the banks of the gorge today serve as a training ground for mountaineers.

What is the best accessible to the Tract Gard from: