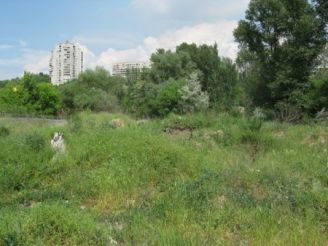 One of the most picturesque places in Zaporizhia, of course, is the tract Sagaydachnogo. With the name Sagaydachnogo tract associated Hetman built at the time to strengthen.

What you can see in the tract Sagaydachnogo

Tract famous two rocks, called Evil and Central. The first was the so-called pilots who conducted the trial, due to its location entirely absurd; talked, they say, the rock village "is ill." In addition, the locals told us that the bad rock Cossacks were punished and executed, as well as the bad rock at the time was a plague hospital. Central rock often called as rock Sagaydachnogo. In the early 19th century on the rock I had a stone that looks like a Cossack smoking pipe and therefore called the COT.

At the top of the cliff there was a recess in which you can sit comfortably in a chair. Archaeologists have found a rock on the Middle Neolithic parking signs. Both rocks were thoroughly destroyed during the construction of the Dnieper, their remains only remind that previously were these mighty cliffs.

By the way, before historians came another version of the origin of the name of the tract, which told the old-timers. In one of the coastal beams lived Cossack Cossack Sagaidak, who died in his dugout during the onset of the king`s army in the late 18th century.

Located tract Sagaidachnogo in Kiev on the left bank, in a recess, which is called - in the pit, and the cliffs reach a height of 20 meters. On the other hand the tract is the island of Khortytsya.

What is the best accessible to the Sagaydachniy from: