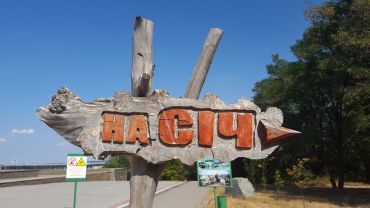 Steeped in invincible Cossack spirit, Khortytsia stretched out the island of the same name in the middle of broad waters of the Dnipro River and it symbolizes a will of Ukrainian people! Khortytsia Island is the national reserve.

Due to museums, historical-cultural complexes, panoramas and historical heritage it reflects the Khortytsia history all through the ages, including the most striking and significant period which is the Ukrainian Cossacks, the time the island was a cradle of Zaporiz’ka Sich.

The historical past of Khortytsia is caused by its location and abundance of natural resources. The island is rounded by rocks, rapids, minor isles setting off full-flowing element of the water. This land was an inspiration to write the following well-known lines: “Реве та стогне Дніпр широкий...” (The Dnipro River’s roaring, groaning…) To find easily your bearings on the ground, imagine 12 km island where three columns are rising to the north: the Divan, Naklonnyi and Serednii rocks, to be considered the gates to Knortytsia since long ago. Nowadays, these 35 m granitic rocks are the alpinists’ choice. To the south the rocks gradually change into overflow land with its pictorial gullies and steeps.

In the 16th century, well-fortified military camps (sichi), kurens, churches (Cossacks were very deeply religious people), were located at this territory. Later, they founded a shipyard (place, used by Cossacks and Russian masters under the direction of N. A. Seniavyn, a vice – admiral, to built a rowing flotilia). In the Ukrainian Cossacks Museum “Zaporiz’ka Sich”, a historical-cultural complex reflects dwelling and household constructions of Cossacks, walls with cannons, kurens and the other buildings to let you feel the atmosphere of that period without fail. As to panorama of battles and Cossacks’ reunion, it is performed in the smallest details.

To the south-east of the island, there is folk - ethnographical equestrian theatre, “Zaporiz’ki Kozaky” , to perform equestrian shows and performances to demonstrate Cossack decorations, craft, sabre fights and so long. You will see and be able to speak to the real Cossacks! You are going to see the rests of the genuine walls to defense, life items, coins, weapon, and cannons while granitic plates are to make you feel moving along the cave. Ancient barrows, Scythian plates, stone sculptures in the open-air are equiped in the most delicate and unobtrusive way as if no one touched it all before. Along the island, there is a tidy road with indices and funny tablets to make you smile.

The connoisseurs of the nature are to discover exotic plants, centuries-old trees, centenary wild pear, old oaks, Tatar maple, poplar of black and silver colors, pine forests, all together to compose more than 960 species. In gullies mainly you are going to meet more than 30 species of wild animals and 120 species of birds, including roes, wild boars, foxes, mooses, kites, herons, turtles and the others.

In Khortytsia, you are to feel deeply the primordial nature and go back home under a great impression without a doubt “The Cossacks will never disappear!”

What is the best accessible to the Khortytsia from: