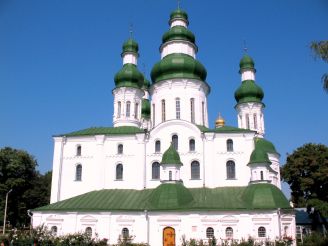 Yelets Uspensky Monastery is located in Chernihiv on the bank of the Desna River. He is considered one of the oldest buildings of its kind in Ukraine. The monastery has a long and rich history. Now he is acting and it is a female monastic enclosure.

The date of foundation of the monastery is considered Eletski 1060. The founder was Prince Svyatoslav Yaroslavovich. There is a church legend, which says that the Prince saw in the woods on one of the firs and the image of the Mother of God in this place and built a monastery. Already in the 12th century on the site of discovery of the icon was built Assumption Cathedral. History is not a simple construction, and covered with a veil of mystery and time. Cathedral frequently passed to different communities and countries. In 1239 the monastery was looted Mongol-Tatars. In 1445 Mozhaisk Prince Ivan began to rebuild the shrine of Chernigov, including the monastery. Later, the monastic abode moves to Moscow, then to the Poles, he plundered and destroyed all the time. In 1649 the building was again given to the Orthodox faithful. Until 1786 Eletskii monastery had in their possession a lot of land and property, but Catherine II took away all the treasury. In 1921 the building of the monastery is closed, open it only in 1992. In 1941 there was located underground RC.

In the 11th century monastery is located in the famous library of Prince Svyatoslav. In 1646, it was within the walls of the monastery Eletski published the first book in Chernigov.

How to get to Yelets Uspensky Monastery

From the railway station can be reached by public transport or to walk across the street Popudrenko.

What is the best accessible to the Eletskii Assumption Monastery from: