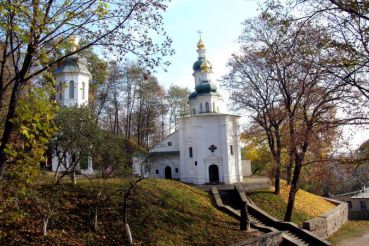 The thousand-year history of an ancient city Chernihiv is associated with numerous underground monasteries that attract and wonder tourists from all over of the world. One of such wonderful monasteries is St Anthony Caves full of mysteries and exciting legends.

History of the Caves

The history of caves goes back to the times of Kyivan Rus. At that time in 1069 St Anthony, the monk, came to Chernihiv. He was a founder of Kyiv-Pechersk Lavra. He liked the Boldini Mountains with its calmness and special energy. It was considered to be a holy place in pre-Christian times due to the fact a heathen temple of Peroun and a holy oak grove were located there. Anthony has dug a cave in the mountain for solitude and prayers. With time the cave turned into a big underground monastery complex with churches and cells, where monks used to live.

There are many legends about these caves and monks. One of them tells about the Tatars’ attack on the city in the 12th century. They pursued the monks in the caves, but couldn’t find them gone with the wind…

St Anthony Caves is a great complex of underground constructions that include St Anthony Church, St Feodosiy Totemskyi Church, St Nikola Sviatosha Church, chapels with burial places, cells of Anthony and of other monks. The caves are unique due to the fact all rooms are located on four levels one above the other. In the morning you might feel special quiet. It’s time you wouldn’t meet crowds of tourists there, so there will be space for you to stay in solitude. The atmosphere of pacification reigns there.

You should be warm dressed as the temperature in the rooms is about 5 degrees above zero. While walking along corridors and galleries of the cave you might think about something high, eternal… People say those who visited these caves notices an unknown power. Some of visitors became full of vitality feeling happiness and lightness, their despondency vanished.

Mysteries of the Caves

It’s worth to mention, that for many years St Anthony Caves is considered to be a place of mysterious and unexplained occurrences. Archaeological expedition noticed in 1960 strange things – scent of incense hung around that place, unknown sounds met their ears. One of archaeologists noticed a silhouette of a transparent figure in a black cassock. Since that time this figure is called a Black Monk. You might see it even today. Scientists still can’t explain anomalies happening here.

The main holy place of the underground monastery is the St Anthony's cell mentioned above. Next to this place special equipment revealed a powerful source of energy unknown in the world of science before. This fact admitted an idea that a meteorite descended here many years ago.

Interesting things happen in the corridors of St Nikola Sviatosha underground church. You might see a gaseous white cloud here. Figures of people in cassocks or faces with beards can be seen in darkness. You might feel a smell of ammonia. Gas goes up to the lamp, clears away and different figures start forming. Such phenomena happen not very often, mostly before midday. This mysticism is worth seeing!

Feodosiy Totemskyi Church located in one of Anthony's Caves shouldn’t be missed by you as it is considered to be the biggest underground church in Ukraine. It is of 9 meters high. You might feel a special acoustic here, that’s why the choir’s performances are of a great success here! Visit this place and you’ll be convenient in it!

St Anthony Caves is not only a sacred place, but also a place, where you can be a witness of a miracle.

What is the best accessible to the Anthony Caves from: