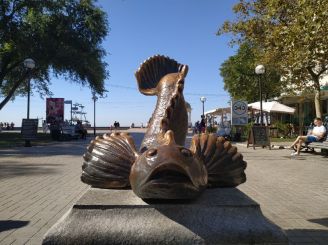 Berdyansk - a resort town situated on the shore of the Sea of ​​Azov. Most of the monuments in Berdyansk located along the elegant promenade. But most attention is attracted by the monument "Bullhead the feeder".

It is this fish and saved the majority of the population of Berdyansk from hunger during the war. At all times, fishing has been one of the favorite pastimes of men and children. Bull catches were huge, up to 90 thousand. Tons per year. But later, in the 70s, he was gone. Residents decided that this was all kind of fish fished and established a monument in gratitude, considering that more hobnob goby they will not. And what was their surprise when, a year later was again allowed to catch this fish commercially.

What is the best accessible to the Monument Bychkov-breadwinner in Berdyansk from: