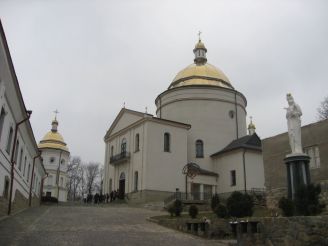 In Ivano-Frankivsk region Dolinskogo area is Hoshiv majestic monastery built in the 16th century. This is a well-known Greek-Catholic church, which stands on a high hill Clear. He was once the main sacred abode in Galicia. First mentioned in 1506 as a monastery, located in the tract "Red Dilok." During one of the raids of the Tatars, he was ssozhen. However, later in the Jasna Gora monastery built a new Hoshiv.

His most popular Greek-Catholic church purchased in the early 18th century thanks to the miraculous icon of the Mother of God. People have argued that this relic has the power to heal the blind, paralyzed, mentally ill and other people wanting to physical and spiritual health. This news spread throughout Ukraine and CIS countries. In 2009, the icon was considered miraculous by the Vatican, and Pope Benedict XV canonized her. Hoshiv monastery was enclosed in the great Marino otpuskovym places of the Catholic Church.

Originally Hoshiv monastery was built in the classic style with elements of late Baroque. Wooden church was rebuilt in stone, however, retained the style. In addition to utility rooms for monks, here you can visit the Church of the Transfiguration. Group Lviv artists under the direction of Igor Oryschaka filled the interior of the temple murals, similar to the monumental art, which was popular in Lviv in the 30th year of the 19th century. This style is reflected in the paintings with the emotional elevation of the New Testament scenes, as well as in the song "Nativity of the Virgin" and "Christmas". Specially invited from Germany art restorers restored five paintings that have survived in Hoshiv monastery with 18th century. On the bell tower of the temple Hoshiv installed electronic bells - the only ones in Ukraine.

After visiting the Church of the Transfiguration of the Lord go to the glass viewing platform. From there, with a clear mountain you can enjoy a splendid view of the hills and valleys of the rivers and Luzanky Svicha.

In Goshev you can get from Ivano-Frankivsk by bus, which goes to the city Bolekhiv. The village is located on the outskirts of Goshev Bolekhiv. If you are traveling on the bus, go on the road in the direction of Stry. Road before turning Bolekhiv you take about forty-five minutes. Having gone five minutes, you will see gold-domed tops Hoshiv monastery.

What is the best accessible to the Hoshiv Monastery from: