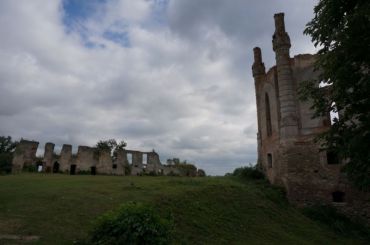 At the jail is one very interesting place - Novomalyn. Although it leads to a terribly bad road paved with crooked and old stones, visit the village stands. For it is here that you can see the ruins of the 18th century.

Changing era, so the castle was rebuilt several times according to the requirements of the time. In 1430 Svydryhajlo decides to present the village with its castle vassals Elo-Malin. Ancestors Malynsky so prized gift to the prince, who owned the castle until the 20th century, and the root of their names formed the basis for the name of settlement.

Castle had a pentagonal shape. At the top of each corner rose a fifth tower.

In the 17th century the castle was built magnificent Baroque palace, and in the 19th century Kastylda Malin, wife of Stanisław Sosnowski, gives the order to build a chapel in Gothic Revival style with a pointed dome.

Their son, Oscar Tadeusz Sosnowski was a connoisseur of art. During his reign the castle became a best Ukrainian residence. Later he moved to Rome, so the building began to gradually deteriorate. Then the owner of the family residence became Dovhallo.

Notably, in the palace were rooms devoted to Japanese, Egyptian, Chinese culture. Also at the residence was a library of rare and unique books. But soon began World War, the family Dovhallo collected 18 carts of their things moved to Zhytomyr, where they were kept in a Catholic seminary. How long are they not zalezhalysya - the Bolsheviks looted everything.

Legend has it that between Novomalynskym lock Ostroh castle and Mezhyritskym monastery there are secret underground passages.

Unfortunately, neither the First nor the Second World War did not regret this amazing architectural ensemble. From the former luxury castles and palaces were the ruins of the towers, remains the foundation of the palace, Gothic chapel, however, without its legendary roof.

How to get to the castle in Novamalyni

What is the best accessible to the Novomalynskyy castle Novomalyn from: