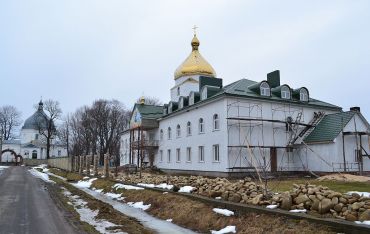 On the bank of a deep lake Svitiaz two centuries ago, was erected a stone church. Church silhouette with a majestic dome attracts attention, is made ​​in the typical architectural style of Volyn. The temple was named in honor of the Apostles Peter and Paul.

Beside him immediately rebuilt bell tower, made in the form of a two-span arch.

The church kept religious shrines. This is a list of the Pochaev Icon of Our Lady of the Holy Doors, as well as the image of St. Nicholas.

Miracle that changed the life of servants of the temple, was already in our time. In 2001, the icon of the Mother of God zamirotochila, it lasted about a year. Since then, the number of pilgrims to the temple increased many times. A year after the amazing event opened Monastery.

The complex of church buildings has grown considerably. In addition to the building of the monastery, there was also the second temple, which was named in honor of the icon - "Sporitelnitsa bread." On religious holidays shrine lowered to her believers could venerate.

What is the best accessible to the Peter and Paul Monastery from: