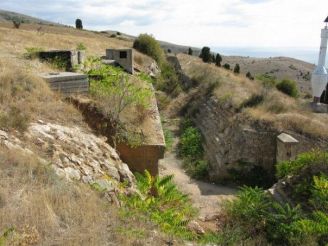 Fort "Northern Balaklava" is located in the tract mullet Vries Balaklava district on the slopes of the mountain of the same name. Its height above sea level reaches 212 meters, due to the appointment of this historic building.

The history of the fort "North Balaclava"

Fort "Northern Balaklava" was erected to protect two towns - Balaklava and Sebastopol on the land side. The author of this project, as indeed the entire fortification line in the area, has become a famous military engineer VN Polanski.

Construction of the fort dates back to the years 1912-1915. The construction of buildings is a system rather deep and long ditches, cut with a certain sequence in the rock. Some of these ditches has concrete walls (fully or partly). Their maximum depth in some places reaches up to 3 meters, and length - up to 2 kilometers.

East and west moat interconnects concreted tunnel. Inside, it is equipped with beds (240 pieces) and mines with special ladders, which can get to the surface. In addition, the walls of the underground tunnels have ventilation holes.

During the Second World War, the underground part of the fort "North Balaklava" was used by the Germans for its intended purpose as a hospital. Proof of this are extant remains of suspended beds. At various times in the fort were tested bombs, weapons and ammunition were stored.

Today, the fort "North Balaclava" - this legendary building, attracting extreme tourists from all over the country and beyond. Most of his fortification structures, including the tunnel retained its previous form, as silent witnesses of the events of past years.

What is the best accessible to the Fort "North Balaklava" from: