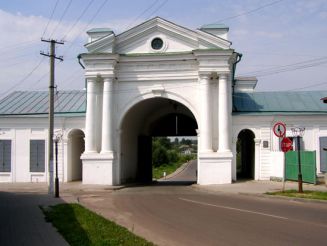 In 1635, a local elder A. Pesochinskogo laid the earthen fort in the area, where previously housed the old Russian settlement. In 1685 it significantly increased. Over time Gluhov proved permanent seat of the Hetman. In the years 1766-1769 was built of stone Moscow and Kiev gates to enter the city. The latter is located not aloof, and were vpravleny directly into an earth mound, where he was hiding modest size containers of stone guards.

In 1804 the city began rescheduling. Steel shaft dig up, strengthening destroyed. Moscow gate dismantled. Kiev little rebuilt according to the plan of Chernigov architect A. Kartashevskii: Replace the old guardhouse more massive, the sides are passages for people.

The fortress was only one of the four entrances to the old city. In addition to the gates of Kiev, also survived fragments of the defensive line.

What is the best accessible to the Kiev gates from: