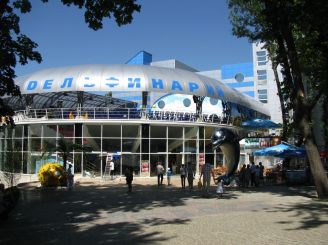 In one of the central parks of Kharkiv has settled a favorite place of citizens and guests - Dolphinarium "Nemo." He became the first dolphinarium in eastern Ukraine. The event took place May 28, 2009. Kharkov "Nemo" is   the largest dolphinarium in the CIS. It was built on the model of Odessa, which is included in the top 5 best dolphinariums in Europe.

The hall is designed for a thousand spectators, and two of its basin can accommodate three million liters of water each. Shows are every day, including a huge variety of popular themed performances. Also acts Aquarium. In dolphins dolphin sessions are held and for the rehabilitation of children.

"Nemo" - is not just a dolphin, and a recreation complex, it also includes a hotel, for guests who prepared a gift - free access to ideas, bathing and wellness center and a restaurant which serves European and Japanese cuisine.

Dolphinarium "Nemo" the best place in Kharkiv for families with children, as well as for tourists who want to immerse themselves in the romantic atmosphere of the sea among the bustling city walls.

What is the best accessible to the Dolphinarium "Nemo" from: