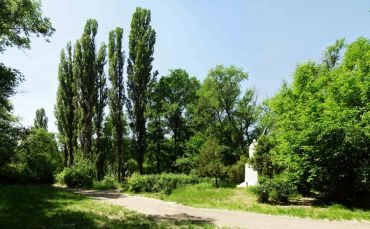 Vorontsov Park is situated on the left bank and is the most important monument of nature. It combines a lively area of ​​the city (Avenue Vorontsov), coastal zone forests and comfortable beach. This unique combination makes the park one of the favorite places of the townspeople.

Besides, it is very easy to reach from anywhere in Dnepropetrovsk. One has only to cross the new bridge from the right bank, or get on the avenue Vorontsov from the left.

The history of the park Vorontsov

Opened a large park in the early 1950s and then called it a park named after Sergei Kirov. Renamed by the end of the 20th century, only because of the convenience to call the park in harmony with the nearby avenue. The park is named after a native of this region and statesman of the Soviet era. After renaming the Kirov Park was created elsewhere in Dnepropetrovsk.

Founders Vorontsovskaya pearls have made every effort to create a truly beautiful place to relax. There were opened several sports courts, playgrounds with various attractions, the area of ​​summer theater and reading room, not to mention hundreds of flower beds, shrubs and ornamental plants. This is complemented by a cozy beach area with landscaped beach. Unfortunately, not all of the above has survived to the present day. Part of the park was launched, some reconstructed.

Take a walk around, you can find dozens of unusual attractions. The most popular ones are the hotel Parus abandoned during construction , but has become a favorite destination for the youth of quests, Festival pier designated a large glass bowl , and much more. Especially will enjoy the beautiful city of fountains, which are traditionally opened in Dnepropetrovsk on various anniversaries and holiday events.

What is the best accessible to the Vorontsov Park from: