Forest of Friendship of Peoples 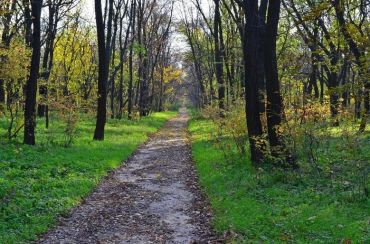 Forest Park of Friendship of Peoples called a large forest, located around the famous park of the same name. Thick green vegetation of different kinds envelops alley of the park, as a continuation of his good for hundreds of meters around. The total area of ​​the forest park has 100 hectares. It is opposite the village Jubilee of Novomoskovsk highway.

The forest has a double origin: some green plants growing here for centuries, the second part - was imported specially for the opening of the park of Friendship of Peoples. It was a major project for all towns in the Soviet Union, the essence of which was to unite labor and the general idea of students from different republics. Around the same time in different places of the USSR opened parks created by the hands of the younger generation. Student company planted different kinds of trees and bushes, which still form a dense alleys parks. Opening in Dnipropetrovsk was held in 1957.

On one of the main streets of the park it was installed a large monument of a bright white stone. It was a three young people of different nationalities: Asian, European and curly black. They are holding hands, formed a vicious circle, symbolizing the strong friendship between the peoples. Unfortunately, by the end of the 20th century the monument was gone. Probably the sculpture was dismantled by vandals.

What else to see

For a pleasant walk in the fresh air in Dnepropetrovsk there are dozens of interesting parks, forest areas , tracts and beams. One should visit the Dnieper-Orelsky Reserve , which is famous for its rich ornithological collection, you can also pay a visit to the park named after Taras Shevchenko . This is a beautiful split-level park, covering the waterfront, the forest zone, the viaduct and several theaters

What is the best accessible to the Forest of Friendship of Peoples from: