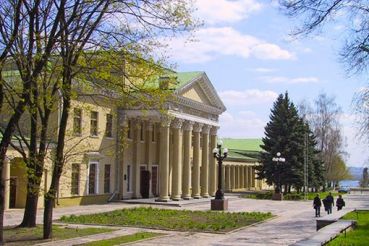 In the center of Dnepropetrovsk is a beautiful park named after Taras Shevchenko. The city owes its existence Zaporozhye Cossack captain.

Even before I founded Katerynoslav Katerina (now Dnepropetrovsk), in the early 8th century settled on the banks of the Dnieper glorious captain troops Zaporizhzhya - Lazar Globa. He was not only a good Cossack, but also an avid gardener. Much water has flowed since then, but the gardens that Globa planted remained. Lower Garden was on the territory of the park named after Taras Shevchenko, and the Upper Garden occupied the lands of modern Lazarus Globa Park.

Lower Garden redeemed at Globa Prince Potemkin for 3000 rubles and its territory built a palace. Then he rightly called Potemkin garden. There were many kinds of trees planted. After his death, the garden started. But in 1805, Tsar Alexander I ordered him to arrange for public festivals. Every evening there playing brass band, were equipped with gazebos, restaurant, cinematography, planted various floral arrangements. Not surprisingly, the entrance to the garden was paid. And in 1917, the garden was renamed the park named after Taras Shevchenko.

To date, it is no less colorful. You can walk around the park alleys with family or friends. Also in the park are specially equipped tables for playing chess, where young people are showing their skills and older people. In Potemkin palace is the Palace of students, where held a variety of concerts, literary evenings, academic conferences. Exterior and the interior is very beautiful, so here are held shooting weddings and other celebrations. In addition, under the palace there are several underground tunnels and labyrinths, which many legends.

The park is located on a hill, so from the observation deck overlooks the beautiful Dnieper embankment. It is also the cascading fountain and several cafes. From here you can walk down to the waterfront of Lenin, or cross the bridge on the Monastic Island. There is a monument to Taras Shevchenko and the snow-white church of St. Nicholas. You can also visit numerous attractions or spend time in one of the cafes. Walk in the park Shevchenko will you prefer and leave a lot of vivid impressions.

What is the best accessible to the Taras Shevchenko Park from: