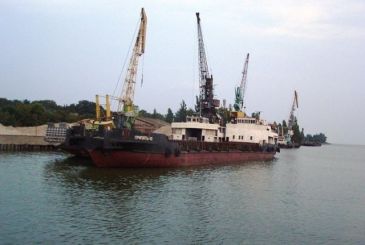 The ferry connects the city of Kamenka-Dnieper Zaporozhye region, which is located on the left bank of the Kakhovka reservoir of the Dnieper River, and the town of Nikopol in Dnipropetrovsk region, located on the opposite bank.

In 1943, during World War II, the Germans locals joined forces with Kamenka Nikopol bridge through which various goods were delivered to the German Army. During the construction of the Kakhovka hydropower plant, resulting in an Kakhovka reservoir, the bridge was destroyed, there was only one support. And at the narrowest point, where they played two capes meet Nikopol and Kamenka, it was organized by the ferry.

Ever since the 17th century crossed the Dnieper was carried out in this place. In the district of modern Nikopol based five Zaporizhzhya Sich. Cossacks one of them, Nikitinskaya, controlled crossing from the Turks and Tatars, who were transported to the raids on Ukraine. In 1736, Tsar Peter I in Stony Creek, the current Kamenka, built redoubt. The soldiers of the royal army and the redoubt controlled the raids of Crimean Tatars and the freedom of action of the Cossacks. During the Crimean War by crossing Nikitinskaya transported sanitary transports and moving troops.

During the development of inland navigation on the river Dnepr with these ferries depart fast boats, river buses, passenger liners. Who runs a ferry between the ports of the SP-2 "Pripyat-10" remained since ancient times. The ferry made ​​at the Zaporozhye Shipyard, is considered the official date of construction in 1958. The vessel is periodically subjected to renewal, leaving only the old superstructure and pontoon.

How does the ferry Kamenka - Nikopol

The ferry is an important logistic link in the south-east of Ukraine. It is necessary for people to travel between the cities, as well as buyers of Kamenka transporting fruit and vegetables.

Without crossing the road between the heater and the Nikopol is about 220 km through the reservoir - to 8 km. The last ferry navigation season on the Dnieper flies two times a day and transports of people, vehicles, oversized cargo.

Ferry enjoyed by many, especially the locals, for them it is the easiest and most convenient way to get in Nikopol. Propelled by steam, which is used for the crossing, it is a Soviet-freight-deck river ferry. It is applied to passengers, various vehicles, various technology, including engineering and construction, small size cargoes on short distances. Initially, the two ships made the crossing - Nikopol and Kamenskoe, but the first burned down, and there was only one ferry.

The cost of the most common transportation on the ferry:

The ferry runs twice a day:

Kamenka schedule ferry - Nikopol can vary, for more information you can contact the river port on the street Krupskaya, 26.

What is the best accessible to the Ferry Kamenka - Nikopol from: