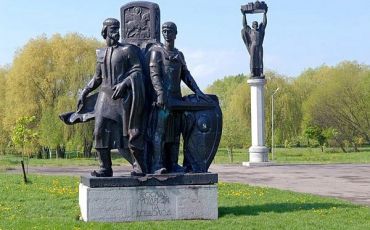 Monuments of ancient princes of Vladimir-Volyn are in a unique location in the city`s historic Detinets surrounded by high ramparts. These trees are an excellent defense to citizens in the Middle Ages.

The history of the monument to Prince

Monuments of ancient princes were installed in the second half of the 20th century and are the main princes of Kievan Rus, glorified the land of modern Ukraine. There is a very great Prince Vladimir, who baptized Rus in 988, as he was called Vladimir and Vladimir First Baptist. In addition, it shows the double sculpture of Yaroslav the Wise, pictured with his son Vsevolod, who became the successor of the prince.

How does the monument

Monuments of ancient Russian princes built in the symbolic triangle: the center is six-meter stele, and on either side of her face Vladimir the Great and Yaroslav the Wise, Vsevolod. From stele paved alley for leisure tourists Historic Park.

The whole composition is surrounded by ramparts, the size of which is about 2 meters high and 1.5 wide. In the 16th century it was part of a fortification structure near the central Cathedral Square.

All the princes had each other next of kin, and is the successor of the famous family of princes Rurik, founder of Kievan Rus.

How to get to the sights

Unusual monuments of ancient princes are at the very beginning of the park "Slavic", the entrance to which is on the street side of Lutsk. This is one of the central streets of the city, which is easily accessible from any part of the city.

What is the best accessible to the Monuments of ancient princes from: