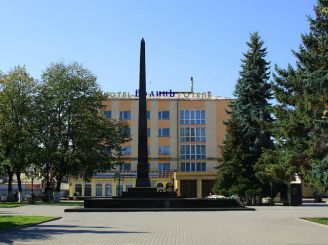 For a small provincial town of Vladimir-Volyn World War II began at the same time, when, and for Poland - September 1, 1939, as the city was a part of this country. However, three weeks later, Soviet troops entered the city, and Vladimir-Volyn came under the power of the Soviet Union. During the war, there were active hostilities, subversion was conducted by the guerrillas. In 1965, the city appeared an obelisk with the names of Fame two heroes who were killed in these places - the commander of guerrilla group AS Grisyuk and pilot SV Milashenkova.

The history of the obelisk of Fame

With the approach of spring 1944 in the Volyn region has intensified activities of the guerrilla unit led by Anton Grisyuk; his unit was part of the compound Fedorov. In April, a detachment led fierce battles on several fronts, destroying enemy manpower and ammunition depots. On April 29, during the next battlefield commander Grisyuk died.

In the summer of 1944 in Vladimir-Volyn Germans still held sway. During a combat mission near the village Mikulichi Vladimir-Volyn region, the aircraft Guards Senior Lieutenant Sergei Milashenkova was shot down. Unwilling to surrender to the enemy alive, the pilot sent his wounded car in the midst of the German troops.

In 1965, Vladimir-Volyn was decided to immortalize the names of the characters. So there was an obelisk of Glory - the grave and Grisyuk Milashenkova, received posthumously the title of Hero of the Soviet Union.

In addition to the Obelisk of Glory in the city is a memorial to the victims of fascism, monuments of ancient princes, a monument to King Danilo Galitsky; many monuments: St. Nicholas Church, Assumption Cathedral, the Church of St. George the Victorious,, Dominican Convent, and so on. d.

Obelisk of Glory is located at ul. Cornflower Prince 1, the city of Vladimir-Volyn.

What is the best accessible to the Obelisk of Glory from: