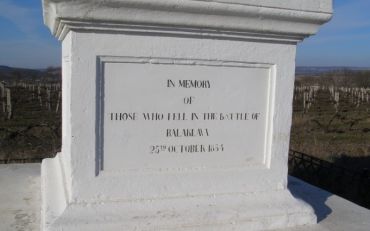 This is one of the 10 most mysterious places in Ukraine. Valley of the shadow of death, and (or Valley of Death). It is situated not far from Sevastopol . And this area - not for the faint of heart.

Once, in the middle of the 19th century, on this earth during the Crimean War were the most severe battles. As you know, then, early in the second half of the 19th century, the Crimean peninsula was the center of bloody fighting between Russia and Turkey, Britain and France. Initially, the debate went on freedom of Russian shipping in the Mediterranean.

Then here in the valley, killing thousands of soldiers, and the soil seemed loosened, dug cannonballs. Up to five pieces they were found in one square meter.

Since then, there reigns depressing, oppressive atmosphere. It literally envelops the one who dares to go down this dead, dry, plain sinister. Rumor is especially creepy here at dusk: everywhere heard chilling screams, groans moribund people flit frightening, terrifying shadows.

Those who saw the valley after the last battle, uttered in shock, "death itself had built its nest here!"

What is the best accessible to the Valley of Death from: