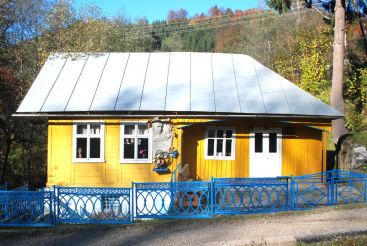 The village Krasnoile Ivano-Frankivsk region among the houses of local residents stands a small house with yellow walls. This museum Hutsul theater Khotkevych. It was here from 1908 to 1912 he lived and worked Ukrainian writer and public figure Gnat Khotkevich, and it is here created the first Hutsul theater.

Wooden house where the museum is located, was built in 1906 as a reading-room. And in 1987, this house has opened its doors Museum of Hutsul theater, whose performances took place within its walls. The house consists of a room and a small hall with a stage; the whole exposition is divided into sections about the history, life, culture and education. The museum houses rare religious books, household items, rare photos.

Gnat Khotkevich was not only a playwright, but also a composer: in the windows of the museum presents the musical works for the bandura written Khotkevich. Many documents mention Kurbas, who in 1912 played in the Hutsul theater.

In 2004 the museum was awarded the title of the theater Hutsul folk. Since 2007, hosts the annual theater festival named Gnat Khotkevych.

For those interested in the history and life of the Transcarpathian region will be useful to visit the Museum of Hutsul in Verkhovyna. Of no less interest is the Museum of Folk Art and Life Gutsulschiny in Kosovo where you can see ancient works of art and the work of contemporary artists. In addition, in the village Verkhovyna district Kryvorivnia are two more interesting and informative place: Museum of Hutsul grazhda and Museum P. Tiles-Goritsvit - Hutsul writer, ethnographer and folklorist.

The regional center is 22 km from Krasnoilya.

What is the best accessible to the Museum of Hutsul theater Khotkevych from: