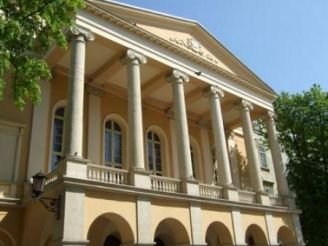 National Academic Ukrainian Drama Theatre named after Maria Zankovetska - one of the oldest theaters in Lviv and its building was built in the 19th іeke. This temple of Melpomene can rightly be called the mother of all theaters of Lviv. Already the first of his productions have been brilliant and immediately conquered the Lviv theater, and spectators from abroad.

Today`s Theatre of Zankovetska, despite stiff competition many theaters of Lviv remains popular due to its topical plays.

The well-known philanthropist, Galician landowner, the Earl of Austro-Hungarian Empire, Stanislaw Skarbek decides on large-scale construction of the theater in Lviv. At the time of opening (March 1842) building was the largest in Europe. It is called "Skarbek Theatre," and he is gaining popularity at impressive rates.

It worked only the most outstanding actors and renowned director. Skarbek, a native of Ivano-Frankivsk region, which at that time was part of the Polish lands, becoming a trendsetter in all theatrical circles.

Since the 1930 Lions passes under the control of the Soviet government and the theater is strictly change his artistic direction. Later, it was renamed in honor of the outstanding Ukrainian actress - Maria Zankovetska, whose portrait even printed on postage stamps.

The architecture of the theater Zankovetskaya

After the construction in the 1840s, the building was adapted several times under the new fashion, but crucially never rebuilt. A large area of ​​the theater today strikes no less than in the 19th century. It occupies a large part of the street Lesia Ukrainka and the nearest intersection, making it a leading construction of the quarter. Architects were Salzman and Pihl, who gave his child the best features of the classical Viennese school.

The current appearance of the theater somewhat changed, unfortunately, has been removed front ledge with rich stucco, but the overall look is still impressive. Its hall can accommodate 1,460 people, as well as 100 years ago, it is one of the largest in Europe.

What is the best accessible to the National Academic Ukrainian Drama Theatre Zankovetskaya from: