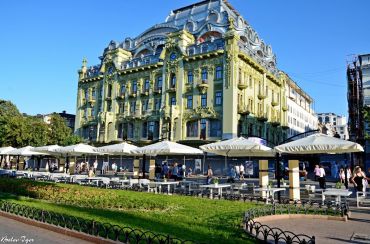 History of the hotel

Dementieva Moscow businessmen, engaged in tea business, bought an unsightly house on Deribasovskaya Street. The owners were planning to build a new building for the head office of the firm, but the political and economic circumstances forced Dementieva to abandon their ideas.

It was decided to build a hotel, which was designed by Leo Vlodek. "Big Moscow" has become one of the most luxurious in the city, but inexpensive for guests. Some Odessans lived in a hotel ever. On the ground floor it has arranged sales offices and "Tatar" restaurant. In the years 1909-1910 the building was sold, along with the family business Anatra. In the second half of the 20th century on the first floor housed a cinema "Chronicle", where they showed documentaries and sweet shop "Golden Key", which sell locally made sweets.

After the collapse of the Soviet Union the building began to deteriorate badly. In 2006 it was decided to reconstruct the hotel "Big Moscow". The new version was designed to equip 59 rooms with two restaurants on the first and second floors. The building was decorated in the style of a greenhouse, using a lot of green space on the roof and routes. We were taken into account modern technology: solar panels on the south side of the facade and built tanks for rainwater.

The architecture of the hotel "Big Moscow"

Superstructure floors is very common method for restoration of buildings with the aim of increasing the area and thus proceeds on its use. The same method was used in the revival of the hotel "Big Moscow". The investor decided to build on two attic floors. As a result, part of the attic and got a great speed. Basically, it looks good, if you do not take into account that the modernity of the attic is not used at all.

Restoration of the "Big Moscow" - is a huge success, because the building was in a sorry state. The hotel was renovated qualitatively, though lost its original uniqueness.

What is the best accessible to the Hotel Grand Moscow from: