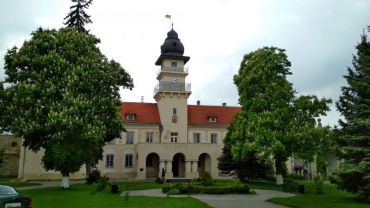 Town Hall Zholkva small town in the Lviv region can be considered the same age of the settlement. Appearing in the city in 1687, the construction immediately became the center of political and social life of the city.

White-stone town hall is not always adorned Zholkva. Until the mid-15th century in its place stood a wooden structure, which had to be demolished due to disrepair.

Up until 1832, the building served as the town hall. It performs not only administrative, but also protective. For example, a three-tiered tower with a sundial on top served as an independent unit of the defense system of the city. But in the mid-19th century buildings is an emergency and was closed for reconstruction.

Only in the postwar years between the Town Hall Zholkovsky lock gates and Glinski was refunded to life. Efforts Bronislaw Victor Municipality acquired a modern look. Of particular importance was given to the decoration of the building. Arched portico and ceramic image of John the Evangelist (patron saint of the city) and today are attracted by its originality and atmospheric pressure.

City Hall is located on the veche square . Also nearby is the beautiful church of St. Lawrence . You should definitely visit this place.

What is the best accessible to the Zhovkva City Tower from: