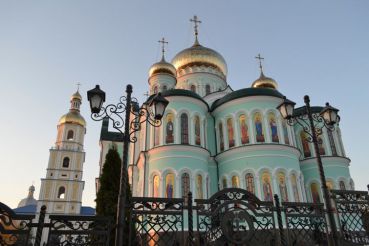 One of the most beautiful and relatively young monasteries in Ukraine is about Bunch village. In this sacred place Believers come from Ukraine, Russia, Moldova, Poland, Romania and other countries of near and far abroad. At this point, there is peace, tranquility and grace, and they are getting for themselves spiritual answers to their questions to help the healing of the soul.

Set in a picturesque location in the woods, the men of the Holy Ascension Monastery of the Ukrainian Orthodox Church of Moscow Patriarchate has opened its doors to the pilgrims. Accommodation and meals in a holy place is absolutely free. Everyone has the opportunity to make a donation in the amount that will tell him the heart.

Construction of the monastery began in 1994. The first service was held in the monastery two years later. Painted Temple sixty artists.

Holy Trinity Church - one of the large-scale construction of the cathedrals of the Orthodox Ukraine was completed in 2011. The cathedral is very high, and its gilded onion with crosses can be seen even at the entrance to Chernivtsi.

The monastery consists of the church of the Ascension, Church of the Intercession of the Holy Virgin, the Church of St. Sergius of Radonezh, situated below ground, two buildings with keliyami, house abbot of the monastery, outbuildings and two hotels for pilgrims. The monastery operates an orphanage, where about 300 pupils.

The main part of the brothers is the Romanians, so services are conducted in Romanian language.

How to get to the Holy Ascension Monastery

The monastery is in the village Bunch of Chernivtsi region. Distance to Chernivtsi is 27 kilometers. From this city, towards the monastery, can be reached from the area Graviton. To do this, from the bus station should take bus №20 and №25, and from the train station - №34. Having reached the stop "Equator", you need to change to bus №227.

What is the best accessible to the Holy Ascension Monastery from: