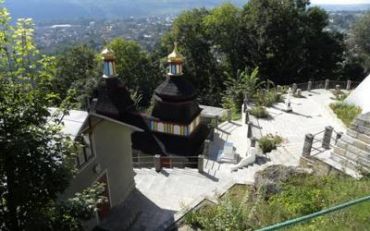 Stopping on the part Bukovina Ternopil region, before you open an exciting panorama of the Dniester canyon near the town Zalischyky. On the part of Chernivtsi region Dniester rocks located Khreschatytska monastery with a rich and ancient history.

The history of the monastery Khreshchatyk

The monastery was founded in the 17th century came from Maniava monastery . The reason for the relocation were conflicts with the Greek Catholic Church. Obzhylysya Monks in a cave on the Dniester, near the source, which was considered curative. But soon the monastery was closed due to a misunderstanding of Bukovyna Radivetskym bishop.

Do not functioning monastery in the first half of the 18th century. In 1760 the monastery church was built Serbian merchant Theodore before. According to legend, the night he saw the source of the strange glow, and being deeply impressed by the spirituality place, decided to lay it on the temple. Another legend says that the night he got lost and nearly fell into the abyss of the Dniester. Thanks to the monks found the road and escaped. Gratitude manifested in his temple.

However, in 1786 the monastery was closed again. This time by decree of Emperor of Austria-Hungary. The church has become a parish. The complex of buildings around was badly damaged at the time of the First World War. And he revived a monastery until 1931, when the Synod of the Romanian Orthodox Church issued an appropriate decision.

Again Khreschatytska monastery lasted not long. In 1962 the Soviets again closes monastery. Buildings used as a recreation complex, a source - for the purposes of mineral water plant. August 7, 1991 Orthodox Church Synod decided to revive Khreschatytska Street abode. From that time until today it functions as a monastery.

The monastic complex consists of several buildings, the oldest of which is the chapel of the holy source, which dates from the 17th century with later alterations. National architectural monument is the church of John the Evangelist 1768 construction. Most buildings are built in the 90s of the 20th century.

The monastery is an ancient cave in which lived the first monks. From the monastery opens an exciting panorama canyon and town Zalischyky on the opposite side of the river.

The monastery is in the village of Khreshchatyk Zastavnivsky district, which lies at the highway M-19 Ternopil - Chernivtsi . If you go by train, it`s best to leave the station Zalischyky and suburban transport to get to the Downtown. Buses pass through the village of Ternopil region in the direction of Chernivtsi. With the city Mortgage regularly sent commuter buses.

What is the best accessible to the Khreschatytska Monastery from: