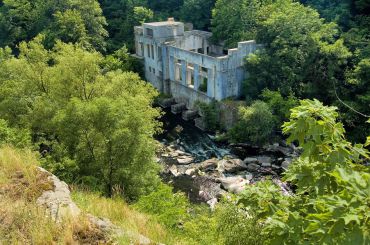 The station was put into operation in 1929. Then, under the motto "Electricity - across the country," plans to build many of these facilities. Bukskaya HPP became a pioneer in this business.

It was a whole hydrological system with dams and sluices. GES worked until 1991. Further, as unnecessary was abandoned and in ruins.

From the bridge over the river offers a great view of the hydroelectric power plant. The remains of the stone walls of the dam is completely overgrown with greenery. Time seems to have stopped here. The station looks like a fragment of the lost city of the stories of science fiction writers. Especially magically appear ruins of the main tower.

Because the river was built hydropower plants, you can also admire several waterfalls. The noise of the water like a whisper stories of the past. Despite the fact that the building belongs to the Soviet, in unity with nature, this place turned out very romantic.

Before the village of Beeches can be reached by own transport or bus from Mukachevo. Road to the hydroelectric power station will prompt you to the locals and also tell a few legends associated with this place. Do you need the track T2405.

What is the best accessible to the Bukskaya HPP Buki from: