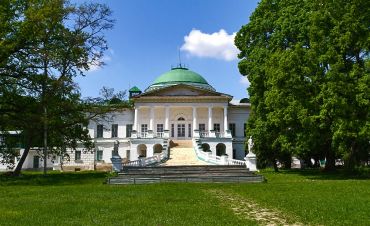 In the southern part of the Chernigov area is the village Sokirintsy. This area is known for its centuries-old trees and dense forests. Therefore not surprising that the complex was founded Sokirintsy garden culture.

In the early 18th century the territory of the park was the ancestral estate of Colonel Ignatius Ukrainian Galagan. In the center of the estate you will be presented its large pure white palace, which for many years has maintained its greatness. In the 19th century, when the family estate was inherited by his grandson Colonel Paul Galaganov, here come the "golden age." Ukrainian elite estate Galaganov called "Ukrainian Parnassus." Gathered here are great and writers as Taras Shevchenko, Panteleimon Kulish, Mykola Lysenko, Ukrainian composer, artist and Leo Zhemchuzhnikov kobzar Ostap Veresaev.

The authors of the palace ensemble became an architect and designer Paul Dubrovsky landscaper Johann Biesterfeld. For the future of the palace was chosen classic style construction. The building of the palace was a two-story family Galaganov and consisted of three parts - the central and two lateral symmetrically arranged. The central part of the main entrance to all building towered over by the portico, which was located on top of an octagonal dome. From the portico on the second floor descended six columns, while the first floor was formed five narrow arches. The main entrance to the palace Galaganov was on the second floor. It is accessed through expanding the earth ramp. On each side of this huge staircase are two marble statues, decorated in antique style. The first sculpture depicts Hera - the Greek goddess. She protected marriage and was a symbol of motherhood. The second statue represented the ancient Roman goddess of fertility and harvest - Ceres.

Go inside the palace Galaganov. Here are sixty rooms, a grand ballroom, the floor is preserved old terrazzo flooring. Its walls are decorated with stucco decorations, and the backyard overlooks a large balcony with columns overlooking the park. Inside the palace Galaganov family can visit the three exposures. The first is devoted to the blind kobzar Ostap Veresaev who patronized Paul Galagan. The second demonstration exhibition reveals the uniqueness of national life, and the third - shows the reconstruction work in the palace.

Be sure to take a stroll through the park Sokirinskomu. Here, among the ancient trees-lived, there is one enclosure, which is about 200 years old. Once in the shade of trees and creek flowed, now it is dry, but kept the bridge, built in the Gothic style. There in the park and the forester hut, next to which is always worth the forester, hewn out of wood. They say if you whisper to him his heart's desire in your ear, it will come true.

To Sokirintsy you can get from Kiev or Chernigov, sitting on one of the regular buses that depart from bus stations. Or you can go on a trip. Thus, your best bet is to travel from Kiev in the direction of Pryłuki and thence by road signs you reach Sokirintsy.

What is the best accessible to the Palace Galaganov from: