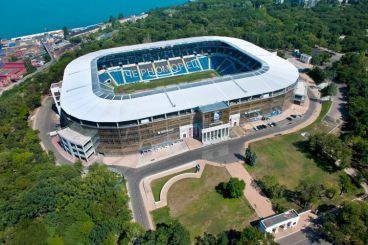 The construction of the sports arena in Shevchenko Park was started in 1925. Inauguration of the stadium was named after Kosior 18 May 1936. This day was also remarkable that semi-final match of the championship was won by Ukraine Odessa team "Dinamo" team of the plant named after Lenin.

During the war due to bombing Arena was severely ruined. Restoration work began in 1945. The same year the stadium was transferred to the publication "Harchovyk." Restoring held for nearly two years, were completed in 1947, but 1946 was already held match postwar Odessa and Dnipropetrovsk teams.

March 28, 2007 in the sports arena was the first official match of the national team. The bout was held between the national teams of Ukraine and Lithuania within qualifying tournament of "Euro-2008".

November 19, 2011 after restoration work was inaugurated the stadium "Chernomorets".

During the construction of the stadium was used unique architectural façade solutions that partially follows the architecture of the historic buildings of the city.

Features of the stadium

Also in the sports arena created pool length of 25 meters of seawater.

What is the best accessible to the Stadium Chernomorets Odessa from: