The Chernivtsi Music and Drama Theatre named after Ol'ha Kobylians'ka 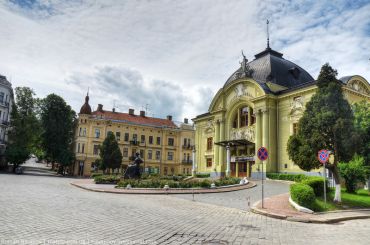 Theatre Square in Chernivtsi - a popular place for walking as locals and tourists alike. To lead the square granite slopes. On the square is the Avenue of Stars, where among bridge immortalized the names of celebrities Bukovina.

Undoubtedly, the main square in the ensemble is Chernivtsi Theater named Olga Kobylyanska. "The dream of velvet and gold" - the so-called building the Austrian publicist G. Gantz. It is constructed in 1903-1905. designed by the famous Viennese architects Fellner and Helmer. They have designed more than 50 theaters in Europe, including in Vienna and Odessa .

Theatre in Chernivtsi - a magnificent building in the style of Viennese Baroque with a rich finish, over which worked best Austrian master. Some parts are made in the popular Art Nouveau style then.

The main entrance is decorated with high relief and sculptures based on Greek mythology. Above the windows - great gable group, and along the side facades in niches busts of Haydn, Mozart, Schubert, Beethoven, Schiller, Goethe. Later added busts Shevchenko and Pushkin. The interior decoration is also impresses with its lavish decoration: here and stucco decoration and ornaments in white and gold colors.

In 1954 the theater in Chernivtsi was named Olga Kobylyanska, and 1980th she erected a monument in front of the theater.

At the theater were the famous opera and dramatic scenes: E. Caruso, F. Chaliapin, M. Bieshu, Krushelnytska and others.

What is the best accessible to the The Chernivtsi Music and Drama Theatre named after Ol'ha Kobylians'ka from: