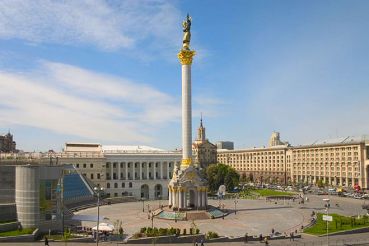 On the central square of Kyiv there is the Monument to the Independence of Ukraine, which symbolises the birth of a new state and is one of the most striking sculptural works of the country.

A two-week competition was held among sculptors for the best project. As a result three models were chosen, elements of which formed the basis of the monument. It was erected in 2001 in honour of the tenth anniversary of Ukraine's Independence. Sculptor Anatoliy Kushch is an author of the monument made in the style of Ukrainian Baroque and late Classicism. The Ukraine's Independence Monument is a 9-meter statue that towers over the city on the 52-meter column. The female figure on the top of the structure is Berehynia-Oranta, who lifts its hands to heaven holding a branch of Guelder Rose (in Ukrainian Kalyna) – a national symbol of Ukraine. The author of the project was inspired by an image of Berehynia-Oranta – a female spirit of Slavic heathen mythology. Berehynia considered to be the mother of all living things, the goddess-protector of home and family, Ukraine and Ukrainians, therefore it is presented in a Ukrainian national dress. It is made of bronze and the Guelder Rose’s branch, a ribbon and dress’ ornaments are decorated with gold. The column is faced with white marble, specially imported from Italy. At its foot there is a building resembling a temple. The total height of the monument is 61 meters. Its mechanism is engineered to withstand all external influences, and a spiral staircase built inside the column is there for technical work.

The Ukraine's Independence Monument is the highest monument in the country. It is an architectural embodiment of Ukrainian Nation’s freedom.

What is the best accessible to the The Ukraine's Independence Monument from: