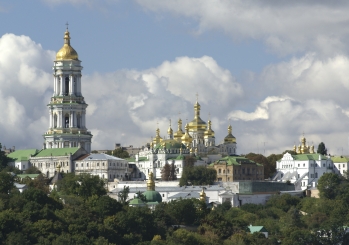 The largest sacred place of monasticism, a cradle of Orthodoxy, a holy treasury and the biggest cloister of Eastern Europe… That is all about Holy Dormition Kyiv-Pechers’k Lavra, which looks majestically on high banks of the Dnipro River with its numerous golden domes gleaming fabulously in a sunny day. On the territory of Upper Lavra, National Kyiv-Pechersk Reserve is located.

Kyiv-Pechersk Lavra is a real masterpiece of Ukrainian and world architecture. It is in a list of UNESCO World Heritage Sites. Today you might see many people from all over the world coming there to pray and to see its wonders. One of them is a preservation of bodies of Saints that are incorruptible for so many centuries. A genuine puzzle known far abroad Ukraine is wonder-working myrrh running of relics of the Saints, guarded in cypress sarcophaguses: myrrh substance composes 80 percent of a living dry body white. You can hardly believe it. One should see it on its own.

The other miracles are antique frescos and sacred images on the walls of cave labyrinths, lots of them are miracle-working.

Kyiv-Pechers’k Lavra is a holy and sacred place. You might feel a special atmosphere here with its laws, customs and its own way of life. The monastery was founded thousands years ago by monks. The name “Pechers’k” comes from a Ukrainian word “pechery”, the caves.

According to chronicles, which have been preserved up to the present days, the 1st little cave was dug on the bank of the Dnipro River by Ilarion, the priest who visited it to pray. Since he became a metropolitan, he stopped visiting this place. After that Antoniy, who lived the life of a recluse, came back form Afons’ka Mountain and settled right there. Ascetic mode of life astonished and charmed others, in time more and more monks started visiting it so there was too crowded for monks to live and they erected the Dormition of Virgin Mary Church and cells. Later, Iziaslav, the prince, at the instance of Ilarion, presented monks with a mountain above caves, where a wooden church was constructed. The caves were converted into the place to bury orthodox Saints and served as a shelter for hermits. And the church has become the largest cloister all over Kyivan Rus’. One can say modern Kyiv is a city of caves, created by human beings, not a nature, as far as under the ground-based temples and buildings, there are many distance cave labyrinths, lots of them are not explored up to this moment.

All the monks were characterized by a high morality and asceticism that attracted many educated and well-known figured. Boyars and princes intended to support the monks, and gave them gold, silver and lands with homagers. Lavra has become a significant spiritual, cultural and educational center. In the 11th century chronicle originated to bring well-known chroniclers as Nikon, Nestor, Syl’vestr worked in Lavra. Nestor, the monk-chronicler, was the one who has written the most outstanding chronicle of Kyivan Rus’ “Povist’ Vremennykh Lit”. “Kyiv-Pechers’k Lives of Holy Fathers”, an important source of Kyiv’s history, was written dating back to the 13th century. In the cloister, there was a library and a printing house, where public worship and polemical books were printed.

Descriptive art has been developing on the territory of the cloister. Icons, painted by Alipiy, the 1st chronicler of Kyivan Rus’, were converted into miracle-working sacred images. Later people constructed a college, today known as Kyiv-Mohyla Academy. Unique manuscripts of ancient books, textile and needlework collections, icons, precious metal works, modern artists and ancient engravings creations, old-time eastern gold adornment of the Sarmatian’s Queen, golden diadem have been preserved until nowadays. All these sacred things you сan see in museums located on the territory of Kyiv-Pechersk Reserve: the Museum of Book and Printing, the Museum of Ukrainian National Ornamental Art, the Museum of Historical Jewellery of Ukraine, the Museum of Theatre Music and Cinematography Art of Ukraine.

What is the best accessible to the Holy Dormition Kyiv-Pechersk Lavra from:

Feel the soul of Ukraine. Grand Tour (full 10 days)
For most people, Slavic lands and their histories are a bit of mystery. When you join this tour, you will discover not only Kyivan Rus, a proud, ancient Slavic kingdom, but much more. You will see with your own eyes historic Kyiv, Ukraine’s 2000 year-old capital with its priceless blend of past and future, and enchanting Lviv, the country’s cultural capital. In-between, medieval castles and fortresses, magnificent mountains and quaint provincial cities wait for you!