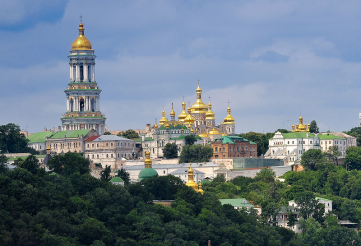 Kiev-Pechersk Historical and Cultural Reserve - a huge museum complex in the central part of Kiev , it is a kind of calling card of the capital of Ukraine.

History of the Kiev Caves Reserve

It was founded in 1922, and in 1996 received the status of National. The reserve is the largest museum complex in the whole of Ukraine. Total focus on its territory 144 buildings, including the unique temples and churches, underground complexes Lavra (Near and Far Caves), exhibition areas, and more. It is noteworthy that the object 122 are monuments of history and culture.

The initial list of objects that are included in the reserve was approved in 1926. However, during the Second World War, many of them severely damaged or destroyed. Thus, for example, was completely destroyed the main cathedral Monastery - the Assumption. Only in 2000, he was again rebuilt and consecrated. In 1990, at the 14th session of UNESCO Kiev-Pechersk Lavra with Sophia of Kiev was entered into the UNESCO list of World Cultural Heritage.

What can be seen in the reserve

Reserve funds total more than 70 thousand objects that are stored in public museums:

On the reserve organized a large number of both permanent and temporary exhibitions. The museum`s collections are replenished with new objects, a variety of events.

Excursions (and case study on 21 subjects) are conducted in Ukrainian, Russian, English, German, French, Spanish, Italian, Japanese, Polish, Romanian. Order a tour on the official site of the reserve by phone or by filling out the form .

Very popular among tourists enjoy exhibition of miniatures Nicholas Syadristogo where, thanks to a special microscope can be seen, for example, to shoe a flea.

Labyrinths of caves near and far - the burial of saints and monks of the Kiev-Pechersk Lavra. This is a place of worship for pilgrimage tourism.

During the whole period of the National Kyiv-Pechersk Historical and Cultural Reserve within its walls has visited more than 50 million tourists from all over the planet. The collection is so rich that it is not enough for a few days to get acquainted with the museum exhibits in its entirety.

What is the best accessible to the National Kyiv-Pechersk Historical and Cultural Reserve from: