The Nativity of Christ Church 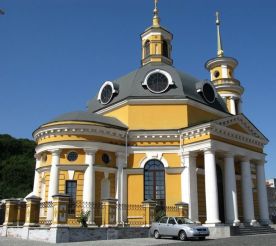 Church of the Nativity - a card of the historical area Podil in Kyiv. It known primarily as "Shevchenko`s church." The temple in Kyiv attracts tourists with its long and complex history.

Church history at the hem

During the existence of the Church of the Nativity has undergone restructuring and numerous destructions. The first written record dates from the year 1543, but in 1564 the church was lost. At this point, the next church lasted from the second half of the 17th and early 18th century until it burned down.

On the exterior can be seen from the plan of Kyiv in 1695 where the church was a wooden structure odnobanevoyu. Again it was decided to restore this place the house of God construction lasted 40 years. But in early 1805 for security architects decided to dismantle the temple.

At the request of parishioners started the construction of a new church on the same site. Still, the church decided to build closer to the Dnieper. Andrew Melensky in 1808 developed the project, which was later embodied in life as architectural structure. Metropolitan of Kyiv Syparion approved it. Only in May 1809 began construction work. Church of the Nativity in Kiev became a vivid example of classical, seasoned by all the canons of this trend. During the construction of the temple was a fire at the hem, but the walls of the building survived and construction completed.

Nativity of the project was a octahedron, which was covered with a dome. He was a decorated dormer and dome with a cross. From the west side of the house was two-tiered bell tower in the east - in terms semicircular altar apse. From north to south building decorated with four Ionic porticoes. Inside was a gilded wooden iconostasis and many icons in silver frames. Due to lack of funds the church itself different from the planned project.

Church of the Nativity in Podil for Ukrainian has a special place. There was a coffin with the body of Taras Shevchenko, where from 6 to 7 May 1861 was the reburial of the poet from St. Petersburg to Kanev . Before a huge crowd of people Dean Peter Lebedintsev hem churches and church rector Joseph Zheltonozkyy held a memorial service for a great poet. Since then the people of Kiev began to call this church "Shevchenko`s."

Through atheistic policies of the Soviet Union, the Church of the Nativity was closed and used as a hostel. Later, when there was reconstruction of the Postal Square have decided that this is not an architectural monument and it is appropriate to bear. In 1936 the church was not at the hem. Valuables, gold and silver frames and icons salaries were confiscated. The wooden iconostasis burned. Icons sold abroad.

Rebuilding the time of independence of Ukraine

Place the house was empty for a long time. Subsequently, there were coffee terrace and garden. The very territory of the church was marked commemorative medal, and in 1997 presented the outlines of the foundation. With the assistance of the Kiev city government during 2002-2005, it was decided to rebuild the church as a landmark architecture. At Christmas 2005 building solemnly was consecrated by Patriarch Filaret. In the middle of the church is a death mask Shevchenko, and the facade of the building hangs a plaque with bas-relief portrait of the poet.

How to get to the temple

Church of the Nativity is located in Kiev on the street Peter Sagaidachnogo 2. To get the most convenient to the subway, you need to get out at the station "Postal Square", from her church to walk about 40 meters.

What is the best accessible to the The Nativity of Christ Church from: