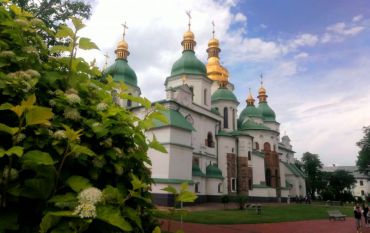 A masterpiece of world architecture, St. Sophia Cathedral, located in the historic center of the Ukrainian capital. The temple was built in the 11th century. As Kiev-Pechersk Lavra , the National Reserve "Sophia of Kyiv" is a magnificent museum and temple complex. The famous cathedral was considered important in Kievan Rus, was the spiritual, cultural and political center, ordained here in metropolitans, anointed princes took ambassadors conducted ecclesiastical and secular (Chamber) fees.

Hagia Sophia is a true work of art. Its architecture is miraculously intertwined traditions of Byzantine and ancient architecture. The temple is one of the few shrines, the interior of which has preserved its original appearance. The unique mosaics and frescoes depicting scenes from the life not only of the saints, but also ordinary people of Kievan Rus, are proof of that. The most famous image in the temple - a mosaic image of the Blessed Virgin Mary - Orans that adorns the main dome of the cathedral. Mosaic is made up of pieces of smalt 177 shades in height it reaches more than five meters. Cathedral walls painted with frescoes. Architectural forms combined with rich paintings make the temple features majestic and beautiful. The cathedral contains a unique thing - the crucifix, which was brought from Constantinople Princess Olga, and Monomakh. Near the cathedral located monastic buildings of the 17th century in the Ukrainian Baroque style. In 1934, the territory of Saint complex architectural structures become historical reserve. At the end of the 20th century it was included in the UNESCO list. Saint Sophia Cathedral - the embodiment of artistic taste, talent, high spirituality. This cultural and historical pride of the Ukrainian people.

What is the best accessible to the Saint Sophia's Cathedral from: