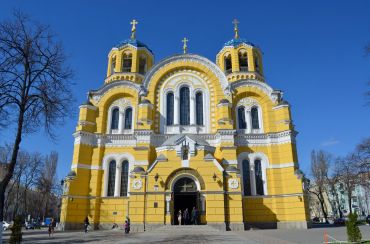 One of the most prominent buildings in the capital Kiev, Ukraine, on the boulevard Shevchenko, 20. This shrine is striking in its beauty and grandeur. The variety of shapes and rich colors of the temple impress everyone who has visited.

Construction of the cathedral began in 1862 and lasted for 40 years. First cathedral was built by the architects Ivan Strom and Paul Sparro. Later it was modified by architect Alexander Beretta.

Today, impressive interior and exterior appearance of the temple, made in the Byzantine style, like the ancient temples of the princes of Saint Vladimir and Yaroslav the Wise. Before you the church with three apses and seven domes. The width of the structure is thirty meters, the length was fifty-five and height, together with the cross - forty nine meters. On the facade of the building with a grand mosaic, made by the artist Alexander Frolov. The massive bronze doors of the main portal is decorated with cast bronze reliefs depicting the Holy Prince Vladimir and Princess Olga.

Go inside the cathedral. Its walls are elaborately painted with such outstanding Russian artists such as Mikhail Vrubel, Victor Vasnetsov, Paul Svedomsky, Mikhail Nesterov, William Kotarbinsky. Especially memorable songs by Viktor Vasnetsov, decorating the main nave of the cathedral. This is a large-scale historical works: "Baptism of Kiev", "baptism of Prince Vladimir", as well as portraits of the Russian princes Bogolyubsky, Alexander Nevsky and Princess Olga.

Observe the fascinating image of the Virgin, also known as "Our Lady of Vasnetsov." Under the brush of the great masters of the traditional way has a new and original interpretation. Face of the Virgin executed in the gilded half-light, for light-blue clouds, gently illuminated by dawn.

Smoke gray marble iconostasis decorated with amazing interior of the temple. Also made of marble and mosaic floor of the cathedral. Is unusually rich in luxury silverware, jewelry company that manufactured the Khlebnikov. Vladimir Cathedral is rightly called the great masterpiece of Russian religious art.

Today, the temple relics Macarius the Great and Barbara. Its power in Kiev brought another prince Sviatopolk. For centuries they were buried in the monastery of St. Michael in a silver cancer, weighing more than half a ton. Once in the thirties of the last century, the Soviet authorities expelled the monks from the monastery, the holy relics were secretly transported to St. Volodymyr's Cathedral. However, the precious silver shrine mysteriously disappeared.

To get to St. Vladimir's Cathedral is on the metro to go to the station "University".

What is the best accessible to the St Volodymyr Church from: