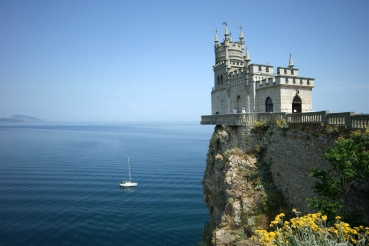 In a little sunny town Gaspra, on a 40-meters high rock called Aurora, a romantic castle “the Swallow’s Nest” (in Ukrainian “Lastivchyne Gnisdo”) is located. There you can expect a sweeping view of Yalta Bay, Fairy-Mountain Vedmid’ and boundless waters of the Black Sea with its fabulous waves.

The castle is a Crimean gem, which attracts tourists from all over the world. You’d be impressed with the small size of the castle and its splendour! You might have an overwhelmed feeling of freedom standing there. The Swallow’s Nest rises above a precipice and it seems just one more second…you expand and fly high above the sky…

The history of the Swallow’s Nest is incredibly rich. At the end of the 19th century, a retired Russian general decided to build a wooden small house-cottage on the very brink of Aurora rock. Though, that moment, a construction barely looked the way we see it today, however, the name “The Swallow's Nest” characterized it perfectly. It passed trough many hands and in the year of 1912, under the project of an architect Leonid Sherwood and under the leadership of Baron Von Stengel, the German owner, the Crimean Coast gained its gem. They say the castle was built as a gift for baron’s beloved and he was inspired by medieval knightly castles of his homeland. Later, the construction was bought by a merchant Shalaputin, who used it to open a restaurant.

“The Swallow’s Nest” is soaked in love indeed. What other else but love power could save it during 9-point earthquake in 1927? The visitors of the Swallow’s Nest will be told an interesting romantic legend. The story is about one-way love of the sea-god Poseidon to the beautiful goddess Aurora. The rock bears her name. According to the legend, the sea-god intended to charm an unruly goddess with help of his magical diadem. But at the dawn a peace of Poseidon’s diadem turned into a magnificent castle.

What is the best accessible to the Swallow’s Nest Castle from: