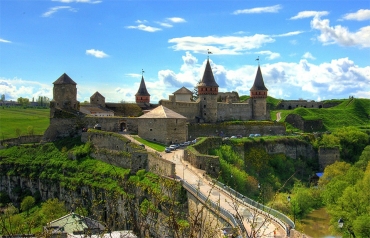 An ancient city Kamianets-Podilskyi is famous because of its special atmosphere of ancient times. You might feel spirit of the Middle Age there. The city is called "flower on the stone". Many tourists from all around the world are impressed with a harmonious combination of nature and impregnable fortress with its defence walls.

On the rocky peninsula an Old City of Kamianets-Podilskyi is located. The Kamianets History and Architecture Reserve occupies this territory. Its fantastic architecture will impress you! Your attention will be attracted by an orthodox Church of the Exaltation of the Holy Cross, both Dominican and Franciscan Order Monasteries, Armenian and Turkish towers of the 17th century, St Mykholai Church of the 14th century, and Muslim Turkish Minaret of the 17th century.

For hundreds of years a severe fortress rises above the rocky cape located between two banks of the River Smotrych. The fortress with its charm is part and parcel of the reserve. According to some historical facts, the fortress existed in the 12th–13th centuries. At first it was used as an Old Russian defence building made of wood. In the 15th century Kamianets-Podilskyi fell to the Polish gentry and became an important defence post of Polish-Lithuanian Commonwealth. A wooden fortress was rebuilt in a stone one.

Fortifications of Kamianets-Podilskyi impressed travelers. Its defence capacity and good location attracted Turkish conquerors, Lithuanian princes and Polish gentry. All this time the fortress was an impregnable stronghold. People say, in 1621, when Khan Osman with his forces came up to the city, he was impressed with the fortress and its strong walls, towers. He was wondering who was a founder of this miracle and has got an answer: “Allah”. Then Osman exclaimed: "Let Allah take it!" and gave an order for a retreat. In its whole history the city-fortress was reduced two times. In 1393 the fortress was captured by Lithuanian prince Vytautas. And in 1672 it fell to the Turks as their forces dominated.

Even nowadays you might feel breath of former times in this stronghold. To get inside of this place you should pass Zamkovyi Bridge, which is extended along the narrow isthmus. This bridge is a unique relic of the past of national importance. It is conceded, it was built by Roman Emperor Trajan while advance on Dacia. You are well advised to go upstairs Denna Tower, where you can expect a wonderful view of the city and the fortress.

Twelve powerful towers create the castle complex. Each tower has its own story and interesting name. In the subterranean of the fortress you’ll notice expositions representing atmosphere of those times. We advice you to visit Komendantska Tower subterranean. You’ll see warriors of Volodyevskyi. Pope tower was named this way due to the fact it was built for the money of the Pope Julius II. In 1812 it was rebuilt into a jail, where a folksy character Ustym Karmelyuk has served a sentence. He enjoyed wide popularity of women and was indebted to them for his salvation. People say, women came to see him and gave handkerchiefs. He tied them together into a rope, which he used to escape from this dungeon. Chorna Tower is interesting for tourists as well, as there is a well made in the rock. You’ll see an old large wooden wheel preserved till nowadays. It was used to get water from the well’s depth for the whole city.

In the west bastion you can see a panorama where Turkish attack of 1672 is depicted. And the east bastion is a place where weapons typical for Podillya region of those times are presented. Everybody will have opportunity to fire crossbow or arbalest. You’ll feel yourself as a medieval warrior.

What is the best accessible to the Kamianets-Podilskyi Castle (Fortress) from: