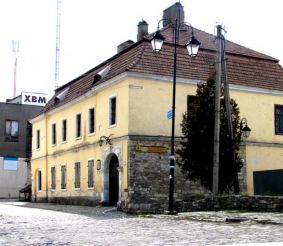 House Bishop has a long and interesting history that is intertwined with the same Kamenetz-Podolsk.

The building was built in the 15th century. Then she acted as a trading house. It was located near the area of ​​the Armenian Cathedral. Later there housed the residence of the Armenian Bishop. Also in this building lived the commandant of the city Jan de Witt.

Bishop House is located near the area of ​​the Armenian market. Today this building holds National Museum town Kamenetz-Podolsk, Department of Archaeology.

The first floor is the museum itself. Exhibits started collecting back in the 19th century.

There are more than a thousand exhibits. They reproduce life, tools and shelter ancient people who lived in skirts. It also posted an exhibition pagan idols. On the second floor is the administration Museum.

By Kamenetz-Podolsk can be reached in several ways. Here is the railway. The station is on Station Street.

It also can be reached by bus from Khmelnytsky , Rivne and Zhytomyr . In the city can move on public transport or taxi. You need to go to the old town, to the "Armenian market." From there you need to walk the streets of St. John the Baptist. Here it will be seen building the museum.

It is best to use a car. The city keeps track M 20. Kamenetz-Podolsk to travel to Prospect Grushevskogo and more - Novoplanivskym bridge. In the Old Town you need to go to the street John the Baptist.

You can also go road E85 (M19) and the village Thick paid to P24, which leads to Kamenetz-Podolsk.

What is the best accessible to the House Bishop (Historical Museum) from: