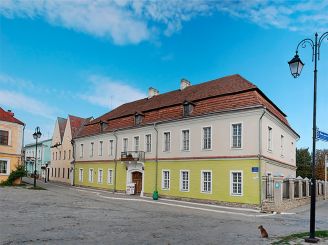 Theological Seminary located in Kamenetz-Podolsk. It is known architectural monument. During the existence of the premises used to house the theater, seminaries, colleges, museums and art galleries. From this house to the city from the balcony was read a decree that skirts the land annexed to the Russian Empire.

Since 1793 this building transferred to the needs and duties of the local nobility. In 1798 the building lease granted for the theater Anton Zmiyevskoho.

In 1805 the seminary was given back to the spiritual department Podolsk Orthodox diocese. It restored rooms, arranged balcony, built the original roof. The house was one of the buildings Kamenetz-Podolsk Seminary. It studied famous figures Anatoly A.Svydnytsky, Stephen Rudanskyi Mikhail Dostoevsky, Nikolai Leontovich.

In 1865 the building passed to religious school for men. In 1891, the house passed to the Archaeological Society. During 1914-1923 years it housed the Museum Society Podolsky church. From 1928 to 1932 the building was used as the Palace of Pioneers. After World War II the premises of the seminary acted factory "Red weaver."

Sound restoration of the building was conducted in 1976-1982, respectively. In 1982, the Art Gallery located here, which were part of Museum town Kamenetz-Podolsk, which operates to this day.

The building of the seminary is a two-storey house, outside covered with plaster. It has a rectangular shape. During the first floor is vaulted cellar. Inside the building a sectional planning.

Now the building is an art gallery. In her exhibition shows paintings and sculpture 17-20 centuries. Also, there remains a large number of icons that once belonged to religious denominations. Also has room Hodovantsya Museum and often hosts exhibitions.

Railway runs through the town. The station is on Station Street. It also can be reached by bus from Khmelnytsky , Rivne and Zhytomyr .

In the city you can use public transport or taxi. You need to go to the old town, to the "Armenian market." From there you need to walk to the Art Gallery.

What is the best accessible to the Theological Seminary (Picture Gallery) from: