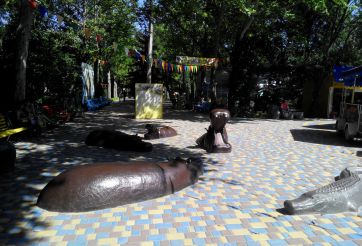 Nikolaev Zoo, which has been recognized not only in Ukraine, but also in Europe, more than 100 years. Zebras, kangaroos, bears, lions, hippos and buffalo, rodents and predators ... On 19 acres occupied by the park, you will find more than 460 species, nearly half of which are listed as endangered. All in all, Nicholas zoo has about 5,700 different species. Not many people know that the first inhabitants of this ancient zoo steel fish. After first appeared aquarium, which is a private collection, created then Mayor of Nikolaev. Its named after the area in which is situated the zoo. In Soviet times, the property was nationalized, with time at the aquarium created a zoo. Learn more about the history, you can look into themed museum, equipped in the grounds of the zoo. At the gates of visitors are greeted with marble lions - they are specifically for the Nikolaev Zoo brought from China. Also, guests are greeted graceful sculptures Bagheera and Mowgli brave, which are a symbol of the zoo. Located close to a flower bed, where he joined the land from all over the world: its a sign of friendship sent more than 30 zoos in the world.

What is the best accessible to the Mykolaiv Zoo from: