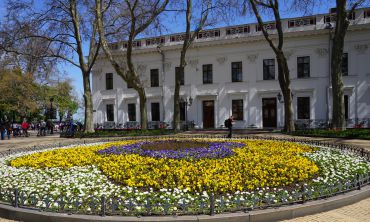 Duma area in Odessa is proud citizens and a favorite destination tourists. It originated in 1834, when at the Seaside, formerly Nicholas, Boulevard building was built Mercantile Exchange, which today is located the city hall. Thus, the nearby area became known as Exchange Square. Later mansion created in the neoclassical style by George Torricelli and Franz Boffo, became the property of the city council, and therefore changed the name of the neighborhood.

Strolling through the Duma Square, you can admire one of the most beautiful monuments of the great Russian poet Alexander Pushkin. On the square is the Odessa Archaeological Museum and a former English club, the walls of which was also in the Navy Museum.

Especially crowded on the Duma Square in February, here is celebrated annually carnival. In addition, many guests gather in the square well-known "Humor", which takes place in the first of April. This small, cozy and extraordinarily beautiful area regularly hosts various concerts and festivals.

Another interesting area is the subject of a gun, which is deployed in the sea. In the old days it was with this instrument was conducted bombardment of the city, and one went straight into the core of the monument to Duke de Richelieu. Today, it is the kernel can see everyone, it is in the pedestal of the monument.

During the Soviet Duma area was renamed the area of ​​the Commune, but in 1994 it was returned to the original name. Interestingly, there were repeatedly conducted kinotranslyatsii, all kinds of meetings, also in the open air by a unique dance school.

Incredibly beautiful area of ​​this ancient spring. When under the warm southern sun to bloom the first trees, and vintage chimes located above the entrance to City Hall, playing a popular melody of the famous composer Isaac Dunaevskiy "Odessa, my native town."

Get to the Duma area can be on the taxi number 145, 148, 150, which follow from the railway station to the city center. Need to reach to the final stop, where you need to walk in the street Deribasovskoy, and there you will Duma area, as well as no less interesting streets and avenues of Odessa.

What is the best accessible to the Duma area from: