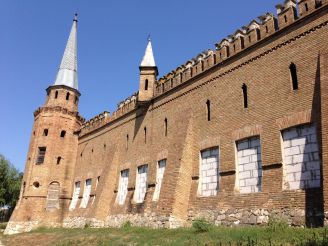 In the Zaporozhye region is an outstanding architectural monument - the castle Popov. Manor nobles Popov was built in the second half of the 19th century in the city Vasilevka. This building is one of the few castle complexes, survived to our time. In the Zaporozhye region there are not many landmarks. The region is best known for its wildlife. Therefore manor Popova - a valuable historical monument. The castle is a masterpiece of architecture of world importance, it deserves the attention of tourists. The museum-reserve includes a historical complex - "Manor landlord period of the Wild Field", and architecture - dating from the 19th century. Facilities striking beauty, a quality in masonry walls. On the estate there are three outbuildings, stables and a lookout tower. Museum "Manor Popova" is situated in the western wing, where there are ethnographic hall, an exhibition dedicated to the events of World War II, also here the works of local artists. Especially interesting is the hall with exhibits from the castle Popov. Here you can see elements of decor, pictures and documents, personal objects, antique embroidery. "Manor Popova" - is part of Ukrainian culture. However, as with many domestic sites, the complex is in a deplorable state. In order to keep this castle, you need to spend some serious restoration measures.

What is the best accessible to the Museum-Reserve "Popov's Estate" from: