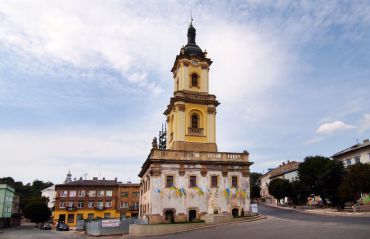 Buceatchi Hall is a true piece of architectural art. This building is unique in that it is a classic baroque style. Such buildings, surviving almost intact in Ukraine, not so much. Pearl of the ancient city of Buchach is an important historical monument. During the last restoration, carried out in the early 2000s, some of the sculptures from the city hall and other exterior parts have been moved to storage Lviv regional museums. And in their place, the exact copies made by modern masters.

Famous town hall built around 1750 on the initiative of Nicholas Potocki, the active leader and elder Kanev. His name can be seen on one of the facades of the building. As the chief architect Bernard Potocki invited Meritina. After hundreds of years, experts have come to the conclusion that it Buceatchi work remains the best work of genius.

Previously, Hall had a height of 38 meters, 18 of which came from the steeple, but destroyed by fire in 1811, he had not been restored. In the mid-18th century in the tower under this spire was a special person, whose duty it was to inspect the city streets. The height of the building could be observed even at the outskirts of Buchach.

During a visit to this invaluable attractions, guests can look in detail at the sculpture on the building, textured stucco with ancient heroes, amazing baroque exterior. At this point in the town hall carried out restoration work to later tourists could admire the interior.

What is the best accessible to the Buchach City Hall from: